At a distance of 21 Kms from Kottayam Railway Station, Kavil Bhagavathy Temple is located in Changanacherry town. The presiding deity of the temple is Kavil Bhagavathy, an incarnation of Goddess Durga.

This temple was built by Thekkumkoor Maharajas, to worship the ancestral deity of the Thekkumkoor Royal Family. It is currently managed by the Travancore Devasthanom Board. This temple is also known as Kavil Ambalam and Sri Bhagavathi Temple. 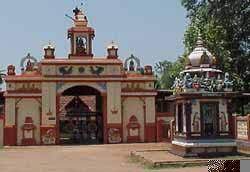