historical and architectural monument of Kerala

Mishkal Mosque is a medieval mosque located in Calicut on Malabar Coast, southern India. The mosque, one of the few surviving medieval mosques in Kerala, is regarded as an important cultural, historical and architectural monument of Kerala.

The mosque was built by the eponymous Muslim merchant-shipowner (nakhuda) in the 14th century. Mishkal - active in Calicut in the 1340s - possessed "great wealth" and a fleet of ships for "the trade with India, China, Yemen, and Persia".Ship-owners known as the nakhudas were among the wealthiest merchants of medieval Indian Ocean world. 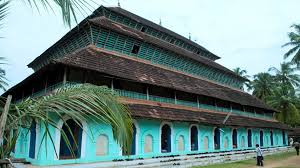