At a distance of 10 Kms from Kottayam Railway Station, Saraswathi Temple (also known as Dakshina Mookambika Temple) is located in Panachikkad. This temple is famous, as the Mookambika Temple at Kollur (Karnataka).

The idol of the Goddess is placed beneath a pond. The main deity at this temple is Lord Vishnu. According to temple history, there was a poor Brahmin who was a devotee of Sri Mookambika Devi and he used to visit Kollur every year. As the Brahmin grew old, he realized that he could no longer visit Mookambika again due to his poor health. As he returned to Panachikkadu, it is said that the Goddess Mookambika settled at the present location in Panachikkadu.

The main festival is the Saraswati Pooja celebrated in September / October. The nine day festival 'Navarathri' is also famous here. 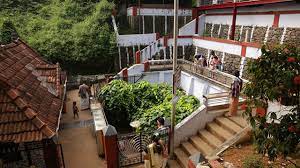