One of the best Catholic Syrian Churches in Alleppey district of Kerala is the St. Marys Syro Malabar Catholic Church where you can throw a glance at various rock inscriptions and ancient artefacts, giving a brief idea about the history of the church. It's a Forane Church which is under the archeparchy of Changanacherry, including several communities under it. 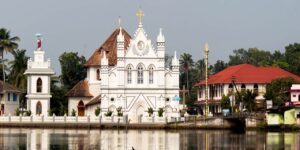